Is It Really a Fail?

One of the things I learned as a parent was that things don't always work out as you expect. I would think a particular experience with my children was going to go one way and very often most often it went in a completely different direction. I used to think that experience was a failure, but looking back at through the eyes of a grandmother I wonder, "Was it really a failure? Or was it just an experience with a different yet beautiful ending that taught me a lesson about my children?”

Back when my children (remember, they are quadruplets) were very young, perhaps about two or three years old, there was a show for children their age at our public library. I was so excited to take them. Actually, I was excited about getting out of the house. Believe me it was a feat to get all of them dressed, into the van, and into the library. We got into the library, sat down on the floor, and the show began. And. Then. Came. The. Clown! That was the day I discovered that two of my children were terrified of clowns. They screamed and attempted to climb onto into me. So, I got all of their coats back on, loaded them all back into the van, and took them back home. Actually, they were all happy to be home. I was the disappointed one. After several attempts at library programs that they really wanted no part of, I took them to the bookstore. I discovered that my children were much happier at the bookstore than they were at the library. I think it was because at the bookstore I read to them instead of the librarian, there was food, nobody told them to sit down and be quiet,  it was just us - just the five of us, and they had my undivided attention. I must admit I prefer bookstores over libraries. They all grew up to be avid readers, and we all have wonderful memories of times spent in our favorite bookstores.

Now that I am a grandmother, I spend time on websites (and bookstores) looking for activities to do with my grandson. Lately, on Pinterest there are sensory bags being made for babies. The Pinterest photos show four, five, six month old babies sitting at their highchairs or on the floor playing with these sensory bags. A few people put a piece of card stock in the bag with some acrylic paint on it so the baby could finger paint. Then they hung these paintings on their refrigerator. I first read about it here on Molly Yeh's blog. She was very creative and had her baby paint with chocolate. Molly provided this link for using paint. I thought this sounded like a great idea, so I got a bag all prepared for my grandson Liam to finger paint after lunch. Well that didn't go exactly as planned. He promptly managed to get the bag, which I had duct taped to his highchair tray, up and he banged the bag around and bent and twisted  it. I haven't finger painted in a long time, but I don't remember that as being part of the process. I put the bag aside and figured we would try it again in a couple of weeks. My husband wanted to throw the bag away, but I decided to keep it. I took the paper out of the bag and laid it out to dry. When I went back and looked at the picture I smiled. That picture was the perfect representation of Liam's personality! The paper was bent and wrinkled, and the paint had been so removed in areas that even some of the paper lifted. I laughed. This is Liam. He loves to bang with and on everything. I wrote the date on the paper and put it aside to create a gift for his mom. She will smile and say, "That's Liam!" I will try this again in a couple of weeks and see what he does. I think I will learn even more about Liam. 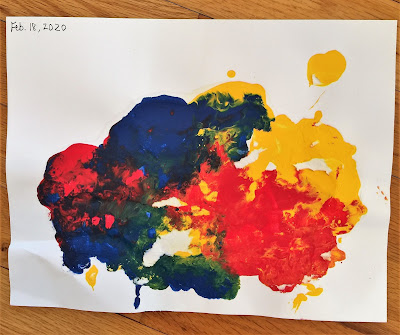 So, are these really failures or are they lessons? Lessons about who these children really are. These experiences shouldn't be about me as the mom or the grandmother. These experiences are about the children. Just like I learned that my children preferred a bookstore over a library I will learn what Liam prefers, and we will create memories doing what he loves to do.

I love being a grandmother!
Have a great week!

A Little Bit About Me

Terry
I am a wife, mother, grandmother, retired teacher, reader, knitter, crocheter, and needle-felter. I am a wife to Gary. We have been happily married for 38 years. I am a mother to 31-year-old quadruplets, Meredith, Rick, Shannon and Tracy. I am a grandma to Liam, my precious and perfect grandchild. I am a retired special education teacher. I love to read, take long walks, knit, crochet and needle felt. I start my day, every day, by putting on a load of wash, feeding Dory my cat, making a cup of coffee, and drinking that first cup of coffee of the day alone with God. I am abundantly grateful for my life!

Promote Your Page Too

You Are Always Welcome To Email Me 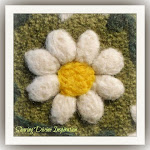